Steve West is a senior WKU instructor and former national kata champion. He has practised Wado Ryu karate since 1976 and has taught at the highest level for the past 30 years. He trained for many years with some of the highest-ranking Japanese Senseis, including Tatsuo Suzuki, Masafumi Shiomitsu, Kuniaki Sakagami Sensei & on seminars, Jiro Ōtsuka Sensei (son of the grand master). His Sensei for the last 18 years has been exclusively Sensei Tony Heap 8th dan. He has represented England in both kumite and kata. Sensei Steve teaches adult and junior classes regularly in WKU dojos in Chiswick and Ealing. He is a regular instructor at WKU national courses. He also oversees the children's classes at schools around Ealing and West London. 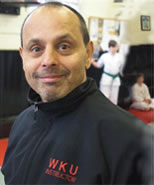 Ruth began training in 1987, at Higashi, Heiwa Karate Club, Ealing under Sensei Henry Francis 4th Dan Wado-Ryu. She also trained regularly under Higashi Chief Instructor Peter Spanton 8th Dan. Ruth attained 1st dan in January 1996. She continued to teach regularly at local clubs and also taught self-defence classes. Ruth has taken part in numerous competitions, competing nationally and at European level, with wins in Kumite and Kata. Ruth took some time out when she had young children but has now returned to the dojo.

Ruth is a Registered Comprehensive Nurse with a Practitioners Degree. 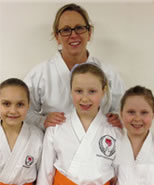